Member of Trine esports team to compete in top invitational 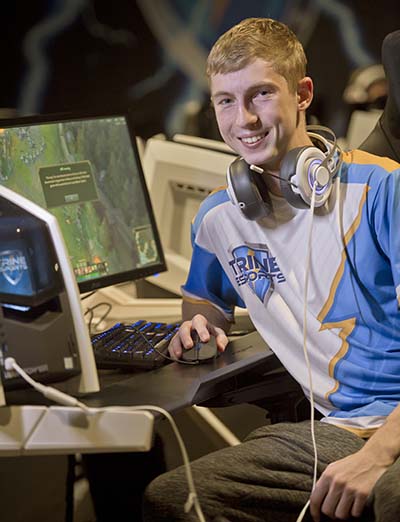 The Trine University Esports program will be represented at the inaugural All-Star Collegiate Esports Invitational which will bring together top collegiate players from around the country.

Blaine Harvey, a junior from Anderson, Indiana, majoring in chemical engineering, will travel to Chicago to compete in the event.

“This puts Trine esports in the spotlight again,” said Director of Esports Alex Goplin, “Harv will be competing among some of the best collegiate competitors across the nation. The Collegiate Esports Invitational is crucial in the growth and the recognizance of esports on a national stage, and we are lucky to be a part of it!”

Individually Harvey made a splash by finishing with a nationwide lead in the statistical category of gold per minute, a crucial aspect of League of Legends gameplay.

“This is a huge accomplishment not only for Blaine and Team Thunder, but for all of Trine esports,” continued Goplin, “What Blaine has done to be a champion and leader on the team has and will leave a lasting impression! On and off the rift Blaine pushes himself to be the best he can be and we are lucky to see him grow.”

While at the All-Star event, Harvey will compete with the top collegiate players in North America representing 40 different universities.

The event will be held in conjunction with the third annual High School Esports Invitational, which gathers high school teams from all over the Midwest to compete. The two events will make up one of the largest varsity esports events in the country.

The Collegiate Esports Invitational will be held Saturday, Nov. 10, and will be live streamed on the Chicago Esports channel.