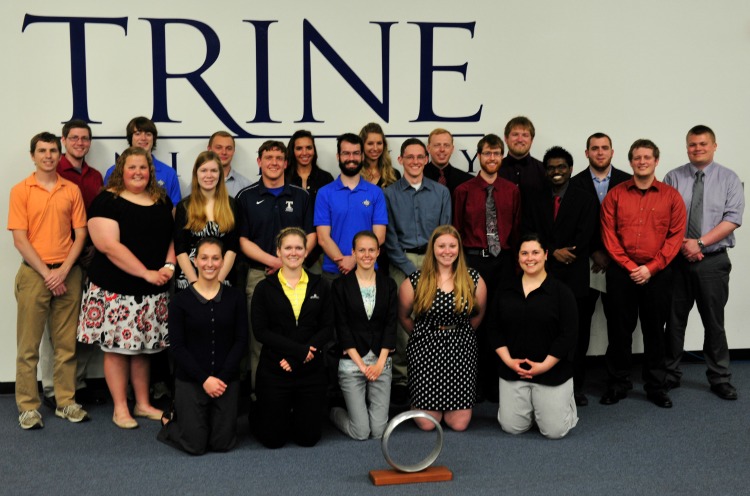 Twenty-three seniors in Trine University's Allen School of Engineering & Technology were inducted into the Order of the Engineer during a ring ceremony on Wednesday afternoon (May 6).

The ring ceremony is the public induction of candidates into the Order of the Engineer, an organization that fosters a spirit of pride and responsibility in the engineering profession, bridges the gap between training and experience and presents to the public a visible symbol identifying the engineer, according to the organization.

During the ceremony, engineering students are invited to accept the Obligation of the Engineer and a stainless steel ring is placed on the smallest finger of the working hand. The obligation is a creed similar to the oath attributed to Hippocrates that is generally taken by medical graduates and which sets forth an ethical code. The obligation contains parts of the Canon of Ethics of major engineering societies and initiates pledges to uphold the standards and dignity of the engineering profession and to serve humanity by making the best use of Earth's resources, according to the Order of the Engineer website.

"As you go out there, keep Trine in your minds" and help make it better for future students, said Allen Hersel, dean of the College of Engineering and Business.

VK Sharma, dean of the Allen School, welcomed the new engineers to the profession. "Only 4 percent of students graduating are engineers so it's good for you," he said, noting there will be more and more demand for engineers.

Engineers who participated in the ceremony include: