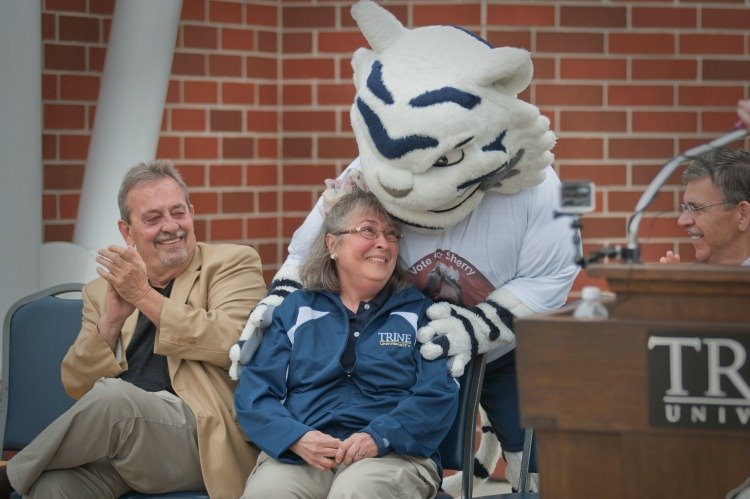 More than 150 visitors and Trine University community members were on hand earlier today (May 6) when Sherry Albright was declared the winner of the Cintas Janitor of the Year national contest.

Jillian Bauer, assistant marketing manager, facility services, made a surprise announcement that Albright had won the contest. Storm, Trine’s mascot, led the audience in applause and at the same time, a duo unfurled a banner on the Ryan Skywalk that states “Congratulations Sherry! Janitor of the Year.”

Trine had invited everyone to a parade with free candy and ice cream to thank those who had supported Sherry during the contest. The parade was led by Angola City Police and featured  Trine's cheerleaders, Campus Operations and housekeeping staff, and Sherry and Storm, Trine's mascot, in a special Trine car. Trine's Jazz Combo performed throughout the event.

Sherry was presented with a promotional large check for $2,500 and a crystal trophy from Cintas. Richard Hickman, Angola mayor, honored Sherry with a proclamation making Sherry the honorary citizen of the day in Angola and said she is a true asset to the community.

Sherry's husband, Erich, and two sons, John and Matt, attended the appreciation event and were also surprised by the news. Her daughter, Sarah, who is living in Seattle, and her mother, Marti Reiter, could not attend.

Two alumni were among the Cintas team to attend the event, 1984 graduate John Vaught, a general manager, and 2009 grad Dean Mais, service manager in Angola.

Trine University thanks everyone who supported Sherry by voting daily. A special thanks goes to Caruso's Italian restaurant, Great Lakes Chocolate & Coffee, Las Limas and Sutton's Deli for allowing the placement of life-size, cut-out signs of Sherry. Trine also appreciates local media WLKI and the Morning Renegades, the Herald Republican and the Journal Gazette for telling about Sherry and the contest.

Sherry plans to join the Morning Renegades from 7 to 7:30 a.m. Thursday, May 7, to tell about the excitement of winning the contest.