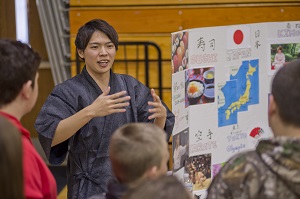 FREMONT — The students of Fremont Community Schools got a look at different cultures represented by Trine University’s international and English as a Second Language community.

Nearly 1,000 elementary, middle and high school students from the Steuben County district heard from and asked questions of the Trine contingent. Maysam Mourad of Saudi Arabia said he and other Trine students shared about Saudi Arabia’s dress, culture, numbers, letters, currency and flag. They also covered how they write from right to left — the opposite of English — the important cities in Saudi Arabia and its two holy mosques.

“Some students didn’t know that we have social media. When someone told them we wanted to take a selfie they got shocked (and asked) ‘Do you guys have SnapChat and Twitter in Saudi Arabia?’ ” Mourad said. “They thought that we lived in a desert and Saudi Arabia is not a developed country.”

The event was the brainchild of Chelsea VanAken, a member of the Fremont High School student council and daughter of Chandra VanAken, administrative assistant in Trine’s Office of International Services.

“Every year to complete honor council status we have to do a state project, and this year’s theme was embracing tolerance and celebrating the dignity of all,” Chelsea said. “I just thought that getting different cultures represented from around the world would be beneficial and celebrate the dignity of everyone coming together.”

Chelsea said originally the event was only planned for high school students, but the student council decided to expand it to all the Fremont Community Schools.

“Usually it’s a much smaller project,” said Eric Wirick, student council sponsor for Fremont High School. “Chelsea took on a very large event that took a lot of planning on her part. She had to coordinate with Trine and with all three buildings in our corporation. She’s done a lot of work in preparation for this event to get everything ready. She’s done a wonderful job I give her all the credit in the world.”

Chelsea said the other Fremont students she had talked to were very positive about the event.

“Everyone wishes they had more time, but to get everyone through we had to cut it short,” she said. “Everyone’s really enjoyed it.”

“We wanted to give the kids here at Fremont Community Schools the chance to experience other cultures and this was a really great way to do it,” said Wirick. “These students from Trine are here on a voluntary basis, so this couldn’t be done without their generosity. Hopefully the elementary kids, the middle school kids and our high school kids get to experience what other cultures are like, which they don’t often get to do here in Fremont.”

Mourad said it was a good experience for the Trine students as well.

“It would be good to do the same event in other schools, to let Americans know more about the cultures of the world,” he said.