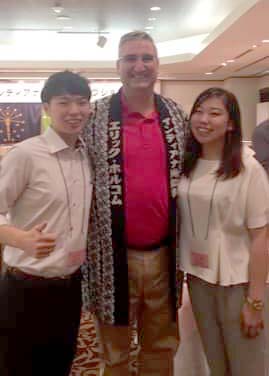 UTSUNOMIYA, Japan — Two Japanese exchange students who spent the last school year at Trine University got to briefly meet with Indiana Gov. Eric Holcomb on Sept. 9 while he was on a trade mission to Japan.

“We just talked about wonderful experiences we had at Trine,” said Kuki.

Indiana and Tochigi have had an economic and cultural partnership since 1999. Tochigi Prefecture supports one of Indiana-based Cummins' global operations and is also home to the headquarters of Fukai Mfg. Co., Ltd., which established manufacturing operations in Jamestown, Indiana, in 2014.

"Japan is Indiana's largest foreign direct investor, and I look forward to working with Japan and Japanese companies to take this mutually beneficial relationship to the next level,” Holcomb said.

The partnership also allows Trine to offer a summer study abroad program each June with Hakuoh University in Tochigi.

Following the meeting, Gov. Holcomb and Gov. Fukuda engaged in a basketball free-throw contest and visited Nikko Toshogu – a world heritage site and resting place of one of Japan's most famous Shoguns, Iieyasu Tokugawa – to learn more about the history and culture of Tochigi Prefecture.