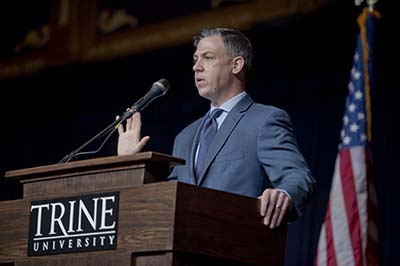 Noting that most Trine University students have no memory of Sept. 11, 2001, U.S. Congressman Jim Banks encouraged them to continue to fight for freedom and support those carrying on that fight.

Banks spoke on the 17th anniversary of the terrorist attacks in the university’s first Distinguished Speaker Series event of the 2018-19 school year, held in Ryan Concert Hall of the T. Furth Center for Performing Arts.

The 9/11 remembrance opened with Earl D. Brooks II, Ph.D., Trine University president, welcoming those in attendance and noting that, “the events that took place that day indelibly shaped our great nation, and defined a generation and our way of life.”

After the Trine University Air Force ROTC presented the colors, the Trine University Choir sang the national anthem, followed by a moment of silence for those who died in the 9/11 attacks. Banks, whose service in the U.S. Navy Reserve included a deployment to Afghanistan, then opened his presentation by recognizing all in attendance who had served or were currently serving in the military.

“Rising a little early, comparatively speaking, I recall a fellow member of my college fraternity from across the hall reacting and calling me into his room in the aftermath of the first plane, American Airlines Flight 11, crashing into the north side of the North Tower of the World Trade Center,” he remembered. “In that moment, all of us watching had little comprehension of how our lives would change and what would unfold next.”

Noting that past generations were defined by events such as the assassination of President John F. Kennedy and the Japanese attack on Pearl Harbor, Banks said, “Wars, assassinations and other events may have shaken us at our very core, but those same moments have shaped our resilient American spirit, permanently embedding events into the story of who we are as a nation.”

Banks said that soon the U.S. will be sending service members to Afghanistan who were not even born on Sept. 11, 2001.

“As a nation we must be willing to support our military with the resources necessary to be ready for today’s challenges and tomorrow’s uncertainties,” he said. He also said the nation owes veterans a debt of gratitude, noting, “Our veterans deserve and have earned the highest quality of care provided in a timely and efficient manner.”

In closing, Banks encouraged students to consider public service as a way to honor the memories of those who lost their lives.