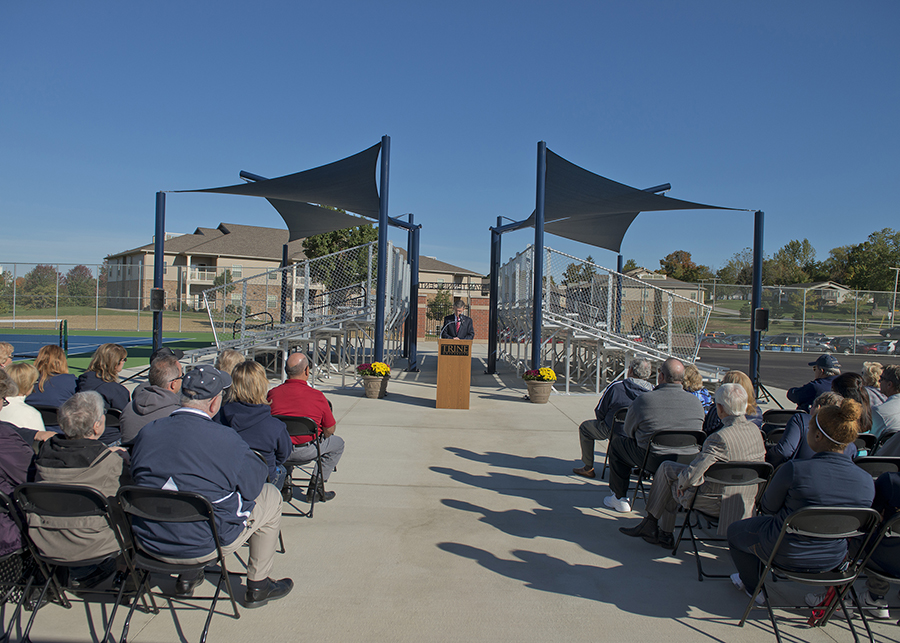 Trine University celebrated its new Ryan Tennis Center and thanked the donors who made it possible during a dedication ceremony Saturday morning of homecoming weekend.

“With an increase in the number of student-athletes for the men’s and women’s NCAA D-III Thunder tennis teams, as well as a focus on the efforts to improve and expand recreational space found on campus, the renovation and expansion of the tennis courts was a necessity,” said Earl D. Brooks II, Ph.D., Trine president. “We are so grateful and forever indebted to the donors who stepped up to make this center a reality.”

Alumnus and trustee Cliff Ryan and his wife are ardent supporters of the university. The Ryan Skywalk connecting the Rick L. and Vicki L. James University Center with Fred Zollner Athletic Stadium is named in their honor as well as the Ryan Concert Hall located in the T. Furth Center for Performing Arts. The Ryans are also regular contributors to the annual fund and to Trine athletics.

Trine alum Carri Trine was thanked for her financial support for the Carri Trine, Caprice Vallon Trine Crotty and Quest Trine Crotty Spectator Viewing Area. The daughter of trustees Ralph and Sheri Trine, she has supported Trine, which is also her father’s alma mater, in numerous ways, including financially supporting the Carri Trine Water Feature Fountain in the Rick L. and Vicki L. James University Center, Fred Zollner Athletic Stadium, the T. Furth Center for Performing Arts, the Books and Beyond Scholarship Program and the Scholarship Gala.

“We are honored to name the spectator viewing area in your and your children’s names,” Brooks said.

Trine also dedicated the Dr. Rudy and Rhonda Kachmann Tennis Courts. Dr. Kachmann is a neurosurgeon who has practiced medicine for more than 40 years. A long-time resident of Fort Wayne, he the founder of the Kachmann Behavioral Foundation and a member of the Tennis Hall of Fame.

Brooks also recognized the Mark I. Forman Tennis Courts that were formally dedicated many years ago by Dr. Leaman Forman, trustee emeriti, and his wife Lou, in loving memory of their son, Mark.