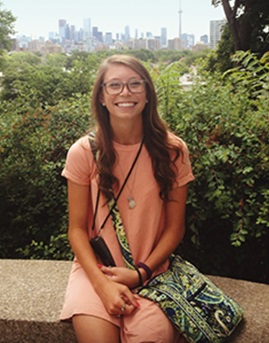 Emily White, a senior forensic science and chemistry major at Trine University, will be an intern at the Drug Lab for the Indiana State Crime Lab in Indianapolis this summer, the first intern the lab has had in six years.

The lab, which is operated by the Indiana State Police, decided to post an internship position for aspiring analysts and around 20 applicants sent in resumes.

White was one of those hopefuls and was selected to be the intern after going through an interview process and taking a tour of the facility.

White is a sister of Alpha Sigma Tau sorority, a student ambassador, a resident assistant and a part of the Trine softball team.

She originally learned about the position through some classmates who were comparing internships.

“One of the girls mentioned that there was one with the Indiana Crime lab. She was applying for a different portion, but there was one for the Drug Department, so I looked it up and applied.”

“I talked to Prof. Layson, Prof. Moravec and Prof. Dulaney about it. They all encouraged me to go for it! I also spent some time with the Employment Resource Center to help build my resume and prepare for not only this internship but for when I was applying for others,” said White.

“I filled out the application, and then sent my resume and cover letter. A few weeks later, I got an email from them asking if I was in town to tour the lab and interview.

“It was nerve-wracking but so exciting.  I felt very comfortable and welcome. The interview almost seemed like a conversation between all of us instead of an intimidating interview. The lady giving me the tour commented that I just looked so excited. It was hard not to be excited because this is all the stuff I have been studying for the past couple years. So seeing it being applied really made me feel good because I know that I am learning things that I hope to apply to a future job.”

White said that she felt very prepared during the interview process.

“The things they were asking me about were subjects and instruments that I have covered in my courses I have taken at Trine,” she commented.

When White found out that she got the internship, she was more than ecstatic.

“It made me feel so good! When I found out in the interview that 20 people applied and I was one of three they chose to even meet, it gave me some confidence. Then, when I was told I got the internship, I may have had a little dance party for myself,” she added.

White will have some responsibilities on her plate when she goes to work in May.

“I will be working on a few projects for them,” said White. “I am going to help build their references for their instruments. I will be doing other not-so-glamorous things like paperwork, but that is all a part of what they do. I will get to shadow some of the analysts, along with maybe going to court with them to see what it is like to testify on the work they do.”

White says she is looking forward to the experience she will acquire as an intern at the lab.

“I hope that I will learn more about the methods that they use, along with the instruments. I am excited to also gain a lot of experience with the field I want to be in. This is a great opportunity because this is the first time they have had an intern in six years and they don’t normally let people job shadow,” she said. “Getting some insight on what it is really like will be fantastic. It will help get my foot in the door!”

White will start her internship at the Indiana State Crime Lab in May after softball season ends.

“This is actually my first experience with an internship and in the future I want to work for a crime lab as either a drug analyst or with chemical trace evidence,” she said.