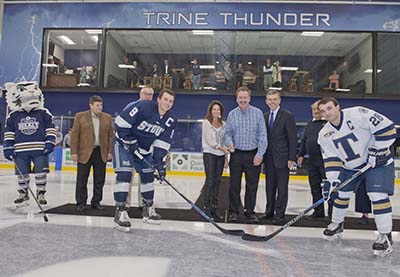 A ceremonial puck drop by Chuck and Lisa Surack of Sweetwater preceded the game. The Suracks were recognized for Sweetwater's support of the Ice Arena, and the company's logo is displayed on center ice.

Keith Busse, chairman of the Board of Directors for Steel Dynamics, Inc., was recognized for the Steel Dynamics Foundation's $1.5 million gift toward the arena. The arena's ice surface is officially named the Thunder Steel Dynamics Ice Rink, with the company's logo also prominently displayed on center ice.

Drs. Ralph D. and Sheri G. Trine, the university's namesakes and members of the Board of Trustees, were recognized for gifting the land on which the ice arena is donated.