31 years at Big Blue: Alum worked in other nations, with UPC during IBM career 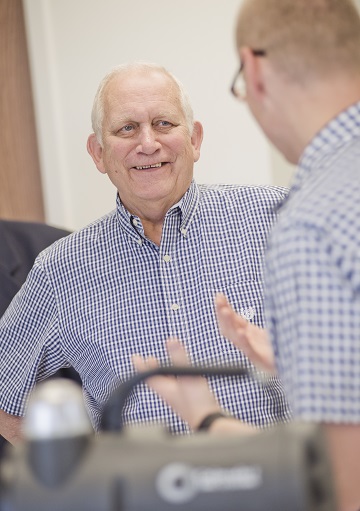 Growing up around his father’s local telephone company, Gene Mallar 1965 BSEE knew he wanted to be an electrical engineer.

But when he was introduced to the IBM 1620 computer at Tri-State University, he knew where he wanted to spend his career.

“I always was interested, but that made me determined,” he said.

Hired by the tech giant after graduation, Mallar embarked on a 31-year tenure, serving three years in France. He also played a part in developing the retail technology that included the now-ubiquitous Universal Product Code (UPC).

Mallar was born in Fort Wayne but his family moved to Camden, Michigan, where his father managed the telephone company. He attended the University of Michigan for two years and married the summer after his sophomore year.

“I was probably more serious about having fun than learning a lot or making the most out of college,” he said of his time at Michigan.

With his wife working in Bryan, Ohio, he decided to transfer to Tri-State so he could live at home and finish college. He commuted with three other students from Bryan to Tri-State, waiting until the last was done with classes to return home.

“By the time I’d get home I’d usually have any homework done,” he said.

In his senior year Tri-State added new computer courses taught by electrical engineering professor Gunnar Wareburg using the IBM 1620. When IBM came to campus to recruit engineers, Mallar interviewed and was invited to the company’s laboratory and plant in Kingston, New York, for follow-up interviews with several departments.

“One of them was a development department that I wanted to work for, and that’s one of the departments they announced they were going to move in a few months to this place called Research Triangle Park,” he recalled. “My first day at work with IBM was their first day operating in Raleigh, North Carolina.”

The department Mallar worked for developed data multiplexers, which allow businesses to consolidate data traffic from remote locations. He worked in that area for about a year and a half before IBM tabbed him for something new.

“They started a small task force to look at the feasibility of IBM getting into the supermarket and retail business, and subsequently to develop an architecture for it,” he said. “They picked four top engineers from the area that had some experience and for whatever reason they picked me.”

“The two main candidates at the time were a bulls-eye code with concentric circles and the bar code. We had some debate within IBM for a while and then settled on the bar code,” he said. “The primary reason was ease of printing. At the time it would have been hard to print the bulls-eye code accurately.”

As the new retail systems were developed, tested and eventually installed, Mallar’s responsibilities increased. He oversaw a group that developed software for the controllers, and, after the systems began rolling out in larger quantities, a group that was responsible for support. Then, as IBM began to receive larger orders for systems from major retailers, he was given charge of a group that determined special contracts with volume discounts, a new concept for the company.

In 1984 Mallar was offered the opportunity to be a planning manager at IBM’s La Gaude laboratory in France, working once again with multiplexers. He moved oversees with his wife and son – his daughter, who was in college, stayed in the United States – for nearly three years.

“They had two main product lines, the multiplexers that handle the data and signal converters — or at the time, modems — and then they got into ISDN and different things,” he said.

Returning to Raleigh once the assignment in France was done, he accepted an assignment as networking product manager for IBM’s Asia-Pacific marketing group. Though he was based in the U.S. again, he traveled extensively throughout Asia and the South Pacific.

“I enjoyed the travelling to different countries. Without having been there before we tend to think, ‘Oh, it’s Asia, it’s all alike, but it’s not,” he said. “Every country is a different experience, with different cultures, different languages, different money and different food, and I enjoyed that aspect of it.”

“It was sort of up to me to define what kind of support they needed and execute it, because there wasn’t any kind of roadmap,” he remembered. “I started what I called the Asia-Pacific Networking College. Once or twice a year I’d bring in a group of experts who would speak about ISDN or whatever the current technology was, as well as what products were coming out in networking in the next year, and train them on how the products operated, how to market them against competition and so on. It went over very well.”

He retired from IBM in 1996, doing some contract work for that company and others for several years before retiring completely.

“I had over 30 years in and I came home and told my wife one day, ‘What would you think about it if I retired?’ and her reply was, ‘When?’ So that’s what I did,” he said.

He said at the time he worked on IBM’s retail technology he had some inkling it could be something big, but no idea it would become as prevalent as it is.

“You’re more focused on the specific thing that you’re doing, but there was some feeling that this could be pretty pervasive,” he said.

He continues to be amazed at the pace of technology development.

“I remember at one point one of the electrical engineering professors saying the speed of the microprocessor is such and such, but we’re approaching the limit because electrons can only travel at the speed of light. Well, that was malarkey,” he said. “They just put 32 of them in a row and do parallel processing so it continues. Something else gets invented and it keeps going.”

He credits his successful career to a willingness to volunteer for extra responsibilities at IBM and to his education at Tri-State.

“I always tried to instill in the people who worked for me that if you go after responsibility you can achieve it,” he said. “If you see something important that needs to be done and you go in and say, ‘I can do that,’ you’ll probably get it. That’s exactly what I would do instinctively and that got me a lot of promotions.”

“Tri-State added to my career,” he said. “I used a lot of my math skills and skills from the computer courses. Professor Alan Showalter in particular was very encouraging and instrumental in getting me motivated, not only in school but after I graduated. He just had a way of encouraging me. He saw potential and he’d keep telling me I could go far.”

He said his life is an example for current Trine students of what they can do with their careers.

“You can be successful going through this institution,” he said.