Above: Juliana Walsh, right, of Fremont has her Little Blackhawks hockey jersey autographed by Jamal Mayers, former forward for the Chicago Blackhawks, Monday night, April 23, at the Thunder Ice Arena on the Trine University campus. Mayers, who played in the NHL for 15 seasons and was part of the Blackhawks’ Stanley Cup-winning squad in 2013, visited the Little Blackhawks program to conduct skill sessions and play games with children in the program. The eight-week program, which has 50 participants, began March 12. The Chicago Blackhawks also supplied player equipment and conducted equipment fittings for the program. 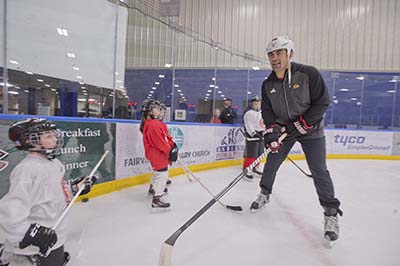 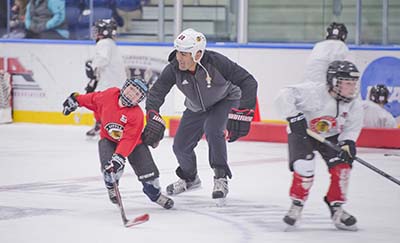