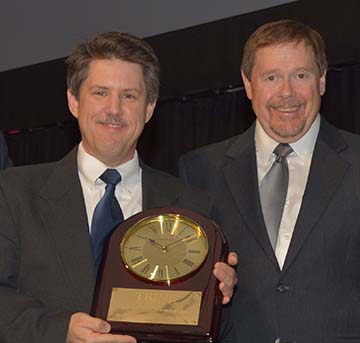 Patrick Sullivan, a 1990 aeronautical engineering graduate, received the Distinguished Service Alumnus Award. The Distinguished Service Award is given each year to an alumnus or alumna who has performed outstanding service to society in his or her profession, personal achievement or community; and who has manifest interest in Trine University and has supported it by contributions of time, talent and money; by recruitment of students; or by placement of graduates.

Sullivan has held leadership positions in the gas turbine and diesel industries for Honeywell, Cummins, Teledyne and now Rolls-Royce over his 23-year career.

For the past 10 years, He has hosted the annual Senior Trine Gas Turbine Class field trip at Rolls-Royce, giving students an inside look at the gas turbine business through a series of presentations by staff and guided facility tours. He has also brought his experience into the classroom, guest lecturing at Trine twice a year for the past five years.

As a member of Rolls-Royce’s recruiting team from, Sullivan has been part of the collective effort that has placed several Trine graduates in highly coveted positions in the company. Utilizing local partnerships, he also secured a one-time grant from CICP Foundation Inc./Conexus to supplement the university’s senior design budget. 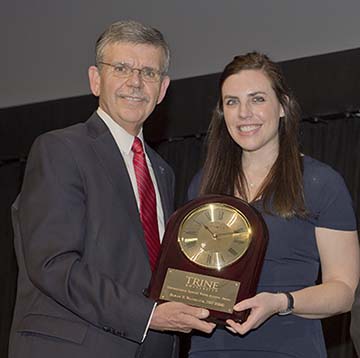 Sarah Waidelich, a 2010 mechanical engineering graduate, was honored with the Distinguished Service Young Alumna Award. That award is presented to an alumnus or alumna who is 40 years of age or younger who has performed outstanding service to society in his or her profession, personal achievement or community; and who has manifest interest in Trine University and has supported it by contributions of time, talent and money; by recruitment of students; or by placement of graduates.

A partner at the Detroit law firm of Honigman Miller Schwartz and Cohn, Waidelich has contributed substantial pro bono work on child welfare cases in the state of Michigan, and worked on behalf of the Legal Services Association of Michigan and for the Michigan State Planning Body for the Delivery of Legal Services to the Poor. 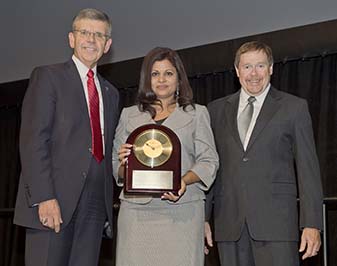 After earning her Trine University degree in in 1995, Shanmugam worked as a quality engineer at Wabash Technologies and then as quality support and industrial engineering manager for Crown International before joining SoPark Corporation in Buffalo, New York, as the company’s only female engineer. Today, Shanmugam serves as president and chief operating officer of SoPark, and she will become majority owner later this year.

She serves on the regional United Way Board of Directors and Women’s Advisory Board. She is also a committee member with the University of Buffalo Women, where she initiated a program to create student employment opportunities at SoPark and provide them with exposure to STEM programs. She was instrumental in the formation of the first Western New York Chapter of Engineering World Health at the University of Buffalo.

She was honored earlier this year with the Women in Leadership Award by the Buffalo Niagara Chapter of New York State Women, a group of professionals working to build powerful women personally, professionally and politically.