At Trine University, we take great pride in providing focused and formative learning opportunities for our students. The Distinguished Speaker Series provides significant educational enrichment that complements other learning experiences on campus. Guest speakers include government officials, business experts, award-winning athletes and coaches, accomplished alumni, writers and various others. All programs are free and open to the public and are held in the T. Furth Center for Performing Arts. For more information, please contact Gretchen M. Miller at millerg@trine.edu or 260.665.4312

Our recent speakers' expertise, knowledge and experience was wide-ranging and offered valued learning opportunities for those that attended their presentation.

Rear Admiral Edward “Sonny” Masso (USN Ret.) was commanding officer of Navy Command Center Detachment 106 at the U.S. Pentagon when they took a direct hit from American Airlines Flight 77 just after 9:40 a.m. on 9/11/2001. Thirty-four of the Command Center team were killed that day, including officers, sailors, government service professionals and contractors.  Other personnel lost their lives in the higher floors just above the Command Center after rescue efforts failed due to the explosive nature of the fire, smoke and destruction that ensued. RADM Masso spoke at the 9/11 Remembrance event on Sept. 11, 2019.

Congressman Banks spoke on the 17th anniversary of the terrorist attacks in the university's first Distinguished Speaker Series event of the 2018-2019 school year. During the 9/11 remembrance Congressman Banks encouraged Trine University students to consider public service as a way to honor the memories of those who lost their lives.

Praising the cooperation that exists between her institution and Trine University, Ivy Tech Community College President, Sue Ellspermann, Ph.D., shared leadership advice with students and the community during the third fall installment of Trine University's Distinguished Speaker Series on October 30, 2017.

On October 16, 2017, in a  presentation frequently punctuated with humor — Coach Holtz stories from his life and football coaching career, and even one magic trick, Holtz told Trine students and members of the community that vision is essential to leadership.

On September 11, 2017, in a poignant and often emotional  presentation, retired Major General Michael S. Repass reminded the Trine University community of the human toll of the Sept. 11, 2001, terrorist attacks and reflected on how the nation has changed since then.

On April 19, 2017, the former president and chief executive officer of Hughes Electronic Corporation, Jack Shaw, encouraged Trine University students and those in attendance at the university's final Distinguished Speaker Series of the school year to get to know themselves.

Self-deprecatingly introducing himself as "a small-town guy with bad grades," the Auburn, Indiana native noted there is nothing in his career he wanted to do that he hasn't done, from managing small companies to leading one of the highest-valued technology companies on Wall Street, and participating in six startup companies either as an investor or principal. 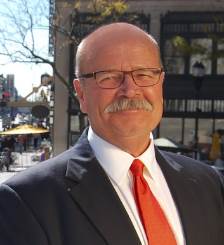 John Gregg, former Speaker of the House, and Democratic candidate for governor of the state of Indiana, spoke at Trine University's Distinguished Speaker Series on Oct. 27, 2016.

A lifelong resident of Sandborn, Indiana, in rural Knox County, Gregg has spent more than 30 years in private business and public life. After working for two Fortune 500 companies in the energy field, Gregg was elected in 1986 to represent southwest Indiana in the Statehouse. He served in the Indiana House of Representatives for 10 years before being elected Speaker of the House in 1996. 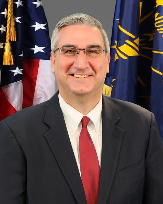 Eric Holcomb, lieutenant governor and Republican candidate for governor of the state of Indiana, spoke at Trine University's Distinguished Speaker Series on Sept. 13, 2016. A life-long Hoosier, Holcomb is a veteran of the United States Navy, was a trusted advisor to both Governor Mitch Daniels and Senator Dan Coats, and a former state chairman of the Indiana Republican Party and, as such, a member of the Republican National Committee.

With a 36-year career in public service, Secretary LaHood has extensive experience on major national policy issues, among them transportation and infrastructure. He served as the 16th Department of Transportation Secretary from 2009 to 2013 and quickly became known as a bipartisan leader and skilled conciliator in a highly partisan environment.

On April 18, 2016, Secretary LaHood presented on Seeking Bipartisanship and the current state of politics. He indicated that if America is going to move forward, elected officials are going to have to work together to get things done.  Full recap.

Most everyone who is successful has overcome a struggle and they kept going to reach their goals, Tino Martinez told the nearly 700 who attended Trine's Distinguished Speaker Series on Sept. 2, 2015. Martinez played with the New York Yankees when the team won four World Series championships.

He also stressed the value of an education. "With an education from here, you have the opportunity to do big things in your life," he said. This is an "amazing campus... you all should be very proud of that." Full recap.

Legendary football coach, Lou Holtz shared his three rules for success: 1.) Do the right thing, 2.) Do everything to the best of your ability with the time allotted, and 3.) show people you care. I've never needed a fourth rule," Holtz said. "Whether leading a football team or your own life -- they've never let me down."

Rick James learned all aspects of foundry operation and in 1989 he and a partner founded Metal Technologies, Inc., that today has sales in excess of $500 million and more than 1,100 employees.

"I couldn't have had any of that without having the knowledge I gained at the foundry. I couldn't have done any of that without the education I received at Tri-State, now Trine University. Those are invaluable and it gave me the ability to understand the business, understand customers, competition, suppliers, employees; all of the things you need to be successful. And, gave me credibility, because if you want to go out and start a business, you better have some credibility. You better have people who want to invest in you; believe you know what you are doing. That experience gave me that and without that experience there's no way MTI could have got started. So I view that as a key to success." 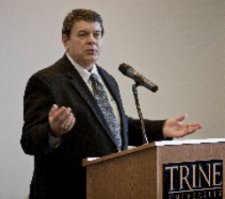 The co-founder of Steel Dynamics presented his speech "Entrepreneurs Success vs. Failures" to share the story of the company's founding in 1993 and how he built it into one of the largest steel producers and metal recyclers in the United States. Steel Dynamics, headquartered in Fort Wayne, Ind., had net sales of $8 billion in 2011.

Ken Peterman presented "The Importance of Communications (on the battlefield and in one′s career). In 2007, he joined ITT Defense as president of the $800 million Communication Systems Division in Fort Wayne, Ind. Since that time, he revitalized the product portfolio and expanded the division′s business focus, winning over 19 contracts worth over $270 million in Iraq alone, and the business area′s new product sales have grown to over 50 percent total sales revenue. "It′s important for people like myself, who have experienced a portion of the career journey, to talk to young people so they can have a context for starting their own paths and making informed decisions," Peterman said. 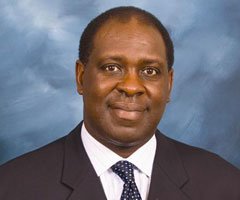 Quinn Buckner is one of only three people in the history of basketball to win a championship at every level – high school, college, professional and Olympics. He is in his 16th season as an analyst for the Pacers’ television games. In July 2004, Buckner was named Vice President of Communications for Pacers Sports & Entertainment. Buckner also leads the Pacers Youth Basketball program, a PS&E initiative to support youth basketball in Indiana. 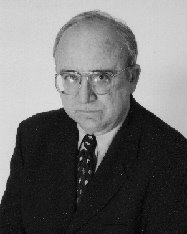 For more than 27 years, Cremo has been “digging up” documented, credible findings that tell a completely different story from Darwinian evolution. For the past decade, Cremo has been lecturing extensively on “Forbidden Archaeology,” which has been translated into 26 languages, and its sequel, “Human Devolution,” at academic institutions around the globe. He said his critique of human evolution has generated considerable controversy.

Cremo is a member of the World Archeological Congress and the European Association of Archeologists. He also is a research associate of the Bhaktivedanta Institute, specializing in the history and philosophy of science.

Kent Benson discussed the “ABCs of Success and Excellence” while on campus. Benson was part of the Hoosier’s last undefeated team in 1976, when IU captured the NCAA champion title. He was named the NCAA Most Outstanding Player and to the U.S. Olympic team in 1976. He was the No. 1 draft pick for the 1977 NCAA draft. He went on to play 11 years with the NBA in Milwaukee, Detroit, Utah and Cleveland.

After a stellar basketball career, Benson now works as a consultant and has become involved with numerous Christian, charitable and civic organizations and is an avid hunter and fisherman. 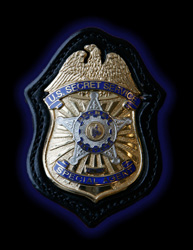 Lesley Cochran-Timm discussed her role in guarding U.S. President Barack Obama and other heads of state during her presentation, “Worthy of Trust and Confidence,” which took its title from the U.S. Secret Service motto. 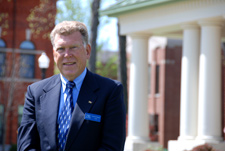 From a helper in his grandma′s diner to managing some of the biggest restaurant companies in the business, food entrepreneur Mitch Rhoads knows his way around the kitchen. "My grandmother's  commitment to excellence stands out to me the most," Rhoads said. "If you don’t have high standards for customer service, then you don′t have much. "After graduating from Tri-State, now Trine University, in 1966, Rhoads took a job with Kaiser Steel and Gulf Oil Co. and served three years in the U.S. Navy in Vietnam. When he got out, he went back to work in the restaurant industry, first with Collins Foods International Franchise of Kentucky Fried Chicken in southern California.

Rhoads stayed with Collins Foods KFC and Sizzler Family Steakhouses, working as a foreign supervisor in Australia. Then, he caught the eye of executives at A&W Root Beer. At just 29 years old, the company – then the largest franchise in the world – hired Rhoads to serve as vice president of operations. He then went on to work for International House of Pancakes and Burger King. He opened some of the first fast food restaurants in Japan and Singapore. At Burger King, he started out as regional vice president and then became the executive vice president of worldwide operations. In 1992, Rhoads purchased LePeep, a once–struggling breakfast–brunch–lunch restaurant in Denver, Colo. Today, LePeep restaurants are in 12 states and thriving. 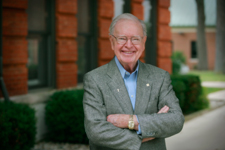 Ketner founded Food Town, later to become Food Lion, in Salisbury, N.C. in 1957. He came to Trine, then Tri–State College and later Tri–State University, to attend school in 1937 at age 17. Orphaned by his parents′ deaths during the Great Depression, he nonetheless possessed what he describes in his book, "Five Fast Pennies," as a different attitude and point of view. "I saw problems as opportunities in disguise. I saw a lemon and made lemonade. I started thinking before starting to work. I never had ambitious goals for myself, but have always done my very best on every job," he writes.

He shared his remarkable ability to make mental mathematical calculations, which he used to cut costs in the grocery business and vault Food Lion to the top. He interspersed the demonstration of mathematics skills with vignettes from his life with one goal in mind, as he states in the book: "To encourage our young people to dream and dream BIG!"